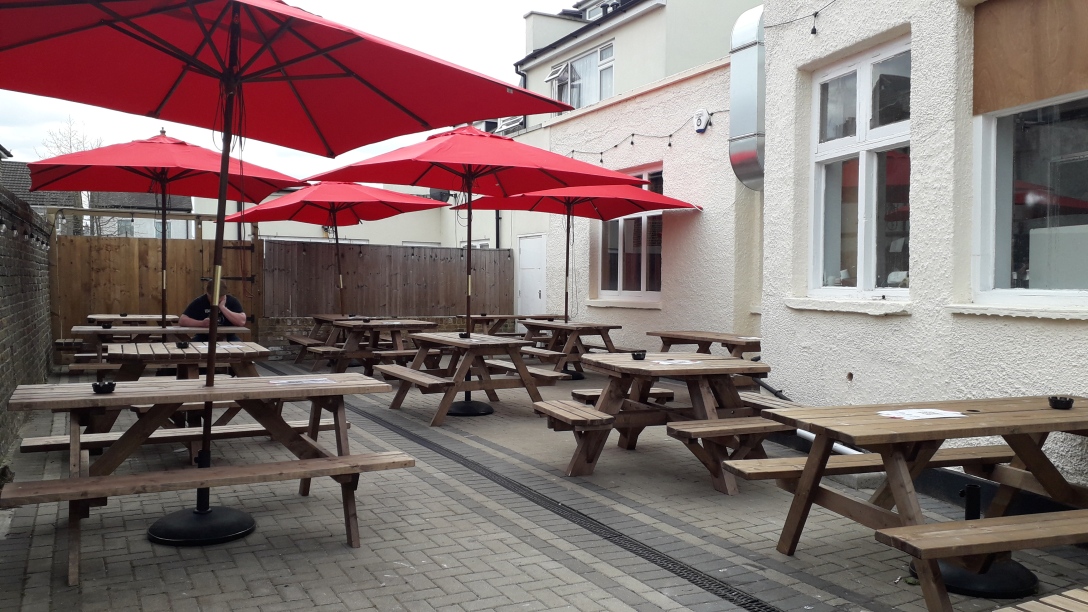 While countries across Europe are looking like into lockdown again, here in the UK we have reached a milestone in reopening – pubs and shops and hairdressers and gyms are now open for customers. Except pubs (and restaurants and cafes) are only open for custom in outside spaces. And yoga studios can’t open because that is group exercise which is still not permitted.

But opening up is good, things looking a bit more normal is good.

It was certainly a good morning on Monday April 12 despite having some health appointments to attend to which meant a trip on the Tube into the city. I went to the dentist and hygienist and they were both happy with me. Lockdown has been good for my teeth – I had less stains on my teeth than usual because I don’t have regular access to a coffee bar in my building anymore.

After I left the dentist, I swung by the library which was reopening for the first time this year I think. I haven’t been there for over a year. Library staff were standing there to greet those of us who had queued up waiting for the opening at 11am. They were very very welcoming and there was a definite sense of excitement. I finally returned the books that I’ve had out for over a year now, renewed my membership which had expired, and got two new books out as well, because why not?

It was also Husband’s birthday this week and I decided to cook a birthday coffee cake (at his request). The cake making was going when I was reading the recipe but we had our friend-in-our-bubble visiting, and she picked up the recipe book to look through and was reading the recipe out to me and so I lost the last two ingredients. What should have been a light fluffy sponge turned out as a thin flat biscuit because I left out the raising agent and the milk. She did remake the cake the next day – successfully – but now we have chunks of dense coffee cake in the freezer to use up – when? And how? I have no idea. (Any suggestions please let me know in the comments.)

We went to our local pub for a drink Husband’s birthday. Our most local pub is not one that was a particular favourite, we would generally walk 25-30 minutes to go to other, better pubs, but friend-in-our-bubble can’t walk very well and we were keen to see what this place looked like after being closed and refurbished for a year (it just reopened now after closing for the first lockdown last year). We had only one drink because it is not quite warm enough to enjoy sitting outside, but positive changes are – it now has a kitchen, so food is available; and it’s in partnership with a local brewery, so the beer choice is better. In fact those two facts probably mean it will be very popular and we still won’t go – not because we don’t like it, which was our old excuse, but because it’s so popular we can’t get in.

Professor Snape made the news this week – not Severus Snape from Harry Potter so chillingly portrayed by Alan Rickman in the films – but Matthew Snape, a professor at Oxford University. Severus Snape was Potions master at Hogwarts; Matthew Snape is professor of pediatrics and vaccinology, which is kind of like potions. Professor M. Snape is looking into the various Covid19 vaccines to see if they can be combined and maintain the same effect. Which is even more like Potions.

Books books books. All this week books have been dropping through the letterbox. Tell me there’s a book prize longlist and I’m sold. My work sponsors a literature prize and most years there are only a handful of books I like the sound of but this year they all sounded interesting, so I ordered most of them. If you’re keen to read books that give you an insight into another culture, here’s a longlist for you:

The Highly Unreliable Account of the History of a Madhouse by Ayfer Tunc, translated by Feyza Howell (Istros Books). Language: Turkish. Country: Turkey.

And then I found there’s a thing called the Jhalak Prize for British/British resident writers of colour. And their longlist also looks amazing. *sigh* We actually have pretty full bookshelves right now so I am not ordering any more, not matter how I want to.

This week I finished re-reading Absolute Beginners by Colin MacInnes. A longtime favourite of mine, although very much of its time (1958). Four chapters, each taking place in one long stream of action over one day (maybe stretching to two days) in each of June, July, August and September. Some of the descriptions of scenes around London are particularly beautiful – in the original copy I bought as a teenager I underlined the phrases I particularly liked. “Trees like classical French salads”, is one that comes to mind. I was glad to find I still enjoyed it, even if there is a lot of 1950s slang that feels dated, like referring to people as “cats”.

It’s a book that has been with me so long that it predates the internet, so after this reading it occurred to me to do some research on the author which I’d never thought to do before. And I found this very detailed article that explained MacInnes’ own story, and put the novel into historical context.

The weekend has been good for long walks. We went for a 2 hour walk along the canal after work on Friday (I slept very well on Friday night!) and a 4 hour walk around the district on Saturday to check out the neighbourhood now that everything has reopened. What’s new, what’s open, what hasn’t reopened.

At our favourite Turkish grocery we bought a large box of Algerian dates. Only to find when we got home we already had a medium sized box of Iranian dates in the cupboard. And a plastic tub with some unnamed dates besides. So we had a date tasting.

The unnamed dates were dry and stringy. The Iranian dates had hints of rosewater and were sweet and soft. The Algerian dates were chewy and fudgy with hints of caramel. Who knew there were so many differences in dates?

And the good thing is, dates make it into the ‘healthy’ food category, despite being sweet like sweets, they are a fruit, so have fibre, unlike sweets, which are just sugar. And with three boxes in the house, I should make sure I am getting a regular date fix.

How was your week? Has the Covid situation changed where you are?