After a rough night’s sleep (our fan broke so the room heated up quickly, and then the dogs started…), down to the bar for breakfast at Hotel Desiatka: mors, bread and coffee (two options – “with milk or without”). And three fried eggs. Well, protein is important to keep your strength up in a radioactive zone, I guess.

We stopped on our way to the city of Pripyat for our guide to give us another reminder of how dangerous it can be to step off the path and why we only walk where she says we can. We stopped on the road beside the Red Forest (now a standard shade of green) and the Geiger counters immediately started to tick with agitation. The Red Forest is beside the reactor and was hit by the radioactive cloud that escaped after the explosion. The area received a high enough level of radiation to scorch the trees red. Although there was some “cleaning” in this area, it remains off limits and holding the Geiger counter near the ground off the edge of the road set it to shrieking.

We entered the city of Pripyat, once a shining example of a modern Soviet city, prosperous and privileged due to the highly skilled workers at the nuclear plant. Our first stop was an apartment building, taller than the one we had visited in Chernobyl-2. Of course, there is no working lift anymore so we walked up 16 flights of stairs to the roof. The views from there revealed two things – one, the proximity of the reactors to the city; and two, the extent to which the trees had taken over in the area. 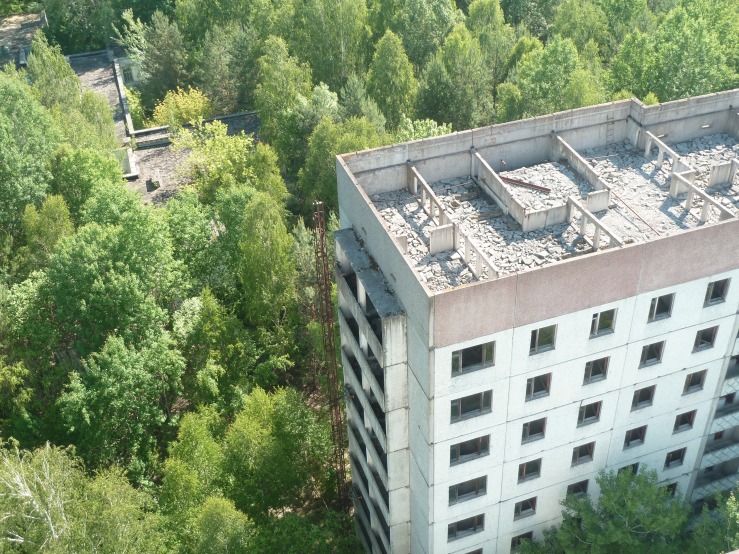 We spent several hours walking around Pripyat – seeing evidence of just how impressive this city must have been.

The swimming pool – here I almost felt I could hear echoes of excited children’s voices as they came from the nearby school for swimming lessons. In fact the pool’s last use was as a “clean” site – it was a place that fire fighters and other emergency workers came to clean up; the water was changed several times a day to provide a safe environment. 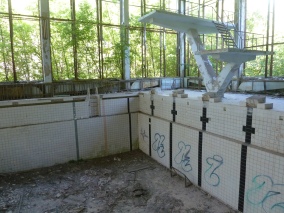 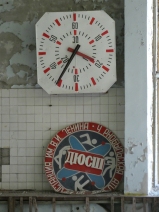 The café – with its riverside location, this would have been a great place to come to meet with friends. On a hot summer day it would have been a great place to sit in the shade and hope for a breeze from the river. Now the building was almost lost behind the trees that had grown around it. The colourful glass windows were still beautiful but the inside of the building had been stripped. 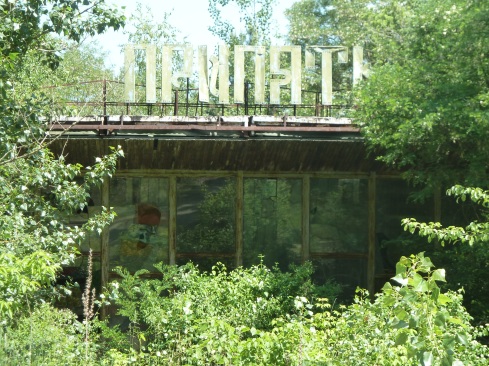 There were several hospitals – Pripyat residents were well cared for – but the buildings are crumbling, windows flap open to the forest outside, and nothing much remains inside. In one room the wall and floor is covered in thick moss; in the nursery, rusted cots are gathered together like a herd of strange skeletal animals. The absence of noise feels stronger here in this place that would have been once so busy. 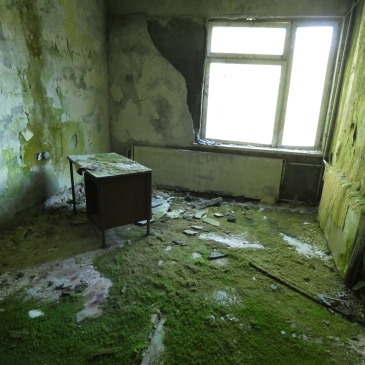 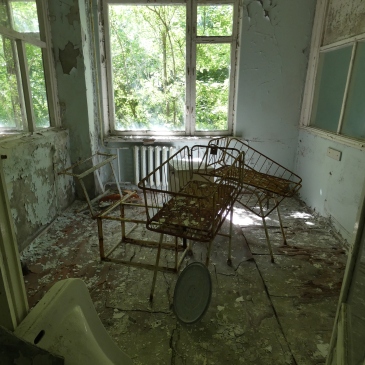 The schools, strangely, didn’t feel so silent. Maybe it’s because more was left behind here, so the buildings looked less empty, more disorderly. But here also there was a hint of window dressing. Were these books really left in this nice pile so the picture of Lenin was on top? And would these books really be in such good condition if they had been left here for 30 something years? 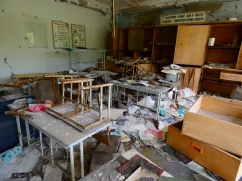 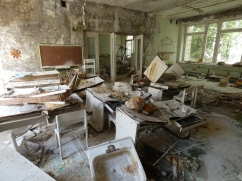 Not that there was any shortage of Soviet era propaganda and paranoia around the school buildings. The pile of gas masks – not related to the accident at the reactor, just a regular part of your Soviet education – school drills to prepare for the case that the West would invade. (I have colleagues who remember being trained in weapons use and grenade throwing at high school.) 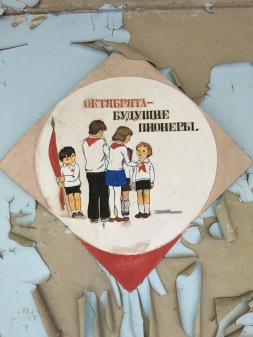 The remains of a shop showed how privileged this city was – a whole wall of TVs available. Impressive for Soviet times as TVs were not easily available for most people, and when they were, they would have been hugely expensive, beyond what most Soviet citizens could afford. So for so many to be here, on display, was a clear indication that citizens of Pripyat were wealthy and privileged.

What once were roads were now thin paths between thick stands of trees. We followed our guide from one building to the next, not really getting any perspective on where we were as the trees blocked our view of any landmarks. Sometimes you would see something appear through the undergrowth that would let you know – this used to be a park or a playground.

We passed by one of the city’s schools, to demonstrate the reason that tourists are not allowed inside the buildings anymore. It is partly collapsed, classrooms now fully open to the elements, several levels now just a pile of rubble, providing a climbing frame for the creeping forest plants. I expect more buildings will collapse in future – the combination of Soviet building standards and no maintenance, combined with hot summers and freezing winters will start to take its toll. 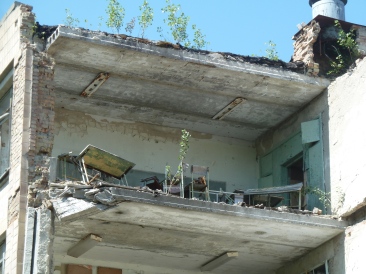 The town square would have been sweeping and grand in its heyday. The “Energetik” building, named for the workers at the nuclear plant, was stark and imposing, in the best Soviet style. The Hotel Polissya (“in the middle of the forest”) on the other side of the square, is now more aptly named, as the trees creep in around it across the decaying asphalt. 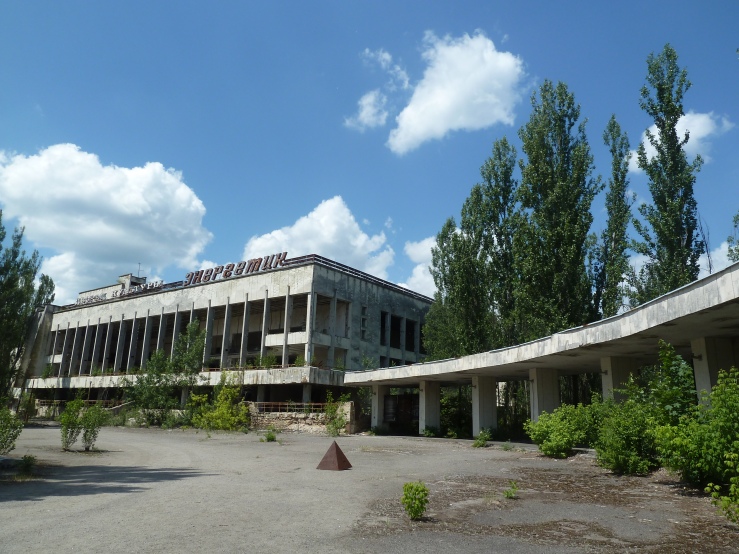 Our last stop in the city was the amusement park. Built but never used as the city was evacuated before it opened. The most use this area had was during the fire, as sand was trucked in here and helicopters flew in to collect it to drop it onto the reactor. This was quite a sad area, swings, dodgems, the Ferris wheel – all built for fun but now rusting away and unused.

After a final meal at Hotel Desiatka (Sing along, you know the words by now: soup! salad! meat! bread! water! mors!) we made a final pass through the 10km radiation check and onto the museum, the last stop on our tour. Beside the museum was a row of place names, memorials to the towns and villages that were lost inside the exclusion zone. So many towns, so many lives interrupted.

What will stay in my mind from this visit is the colours: the intense purple of the wildflowers and lupins growing by the roadside; the blue and turquoise colours that were everywhere on the walls in both private and public buildings; the pink of the dog roses; and green, green, green everywhere in the trees and shrubs and grass and wildflowers because this is their land now.

Australian-born London-dweller. I love books, travel, my garden, my cat, my husband and sunshine but not necessarily in that order. View all posts by Michelle Kn Stone