To save us what looked like a long boring walk, we took the metro one stop from Kreshchatyk to Arsenalna station. Arsenalna station was actually on our list of things to see, as it’s one of the deepest metro stations in the world. Certainly it took a long time to get out, riding two separate, very long, very steep escalators.

The walk to Lavra from Arsenalna takes you along by the river, through some pleasant parks, with a view over the river. In one park, we passed the Holodomor memorial. I didn’t know what it was for until I looked it up later, but with its eerie discordant chimes and images of birds with their wings encased, it was obviously not for something good.

Holodomor monument (and museum) commemorates the Ukrainians who were victims of famine in the 1920s. But the word, Holodmor, indicates something bigger than famine. It implies a man-made situation that was targeted at ethnic Ukrainians who were not happy with the new Soviet system they found themselves living under.

We finally reached the Lavra complex, and complex it was as we consulted the ticket board with its many ticket options. When we tried to buy, it turned out the options were not that complex. At the gate you just buy a basic entrance ticket; for the many museums and buildings available to visit inside, you can buy separate tickets there.

We visited the belltower, guarded by staff from the Soviet charm school. Here we got nice views over the complex and across Kyiv.

We took a look inside the cathedral, But I got annoyed because why put up signs saying “no shorts or sleeveless tops”, “women cover your head” and “no photographs” if no one polices this?

The highlight of the complex is supposed to be a visit to the caves, which were described as being like the catacombs. No – no they are not.

The Lavra caves are a religious place of worship where believers go to pray over the mummified bodies of priests or bishops who are wrapped in embroidered cloths and displayed in glass coffins. Women have to cover their heads as this is a sacred place, and no photography is permitted, for the same reason. The corridors are narrow and crowded with praying people kissing the glass coffins so personally I do not recommend visiting the Lavra caves for tourists or anyone who isn’t of the Orthodox faith.

At the second caves complex I was told off by an attendant for trying to go in wearing trousers (three-quarter cropped trousers). I had to avail myself of one of the apron-like wraparound skirts to cover myself before I could go in. The second caves complex was very similar to the first and being disgruntled about having to wear an apron-skirt and a scarf over my head, walked through as fast as I could. Enough.

After a sandwich and an ice cream lunch, we walked on down towards Rodina Mat, the Motherland monument. To get there we had to walk through several military memorials, with various pieces of military equipment from recent history on display. Some of these were free to get up close to; some were behind a fence with paid admission (something like 10 or 20 hryvnia). For an additional fee you could sit in the cockpit of a fighter jet!

Rodina Mat is a 62m tall steel lady who dominates Kyiv skyline. Despite modern high-rise development, she is still a landmark you see clearly on approach to the city. She is technically a World War II monument (built in the 1950s) and stands over the WWII museum. 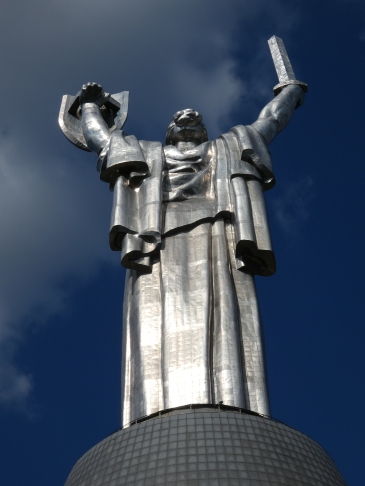 The husband had seen videos as proof it was possible to climb up inside the monument, like you can with the Statue of Liberty, to come out at a platform behind her shield; however on the day we visited we couldn’t see any access point for this, and frankly it didn’t interest me so much. Rodina Mat is one of the most interesting points on the Kyiv skyline, and once you have climbed up onto her shield, you can’t see her.

Once we had fully enjoyed the lookout point and taken photos from every single angle, we started a slow walk back towards Arsenalna, passing by some more brutalist monuments and the fabulously once-futuristic but pineapple-like Hotel Salute. 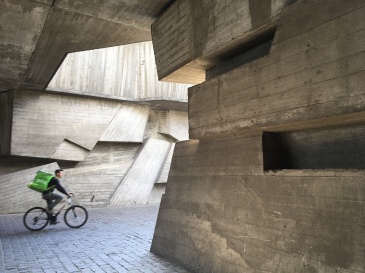 Dinner than night was at the Very Well Café around the corner from our Airbnb.  We were amused to watch the two couples at the table next to ours – the men were eating big plates of food, the two women having tea and juice. It seemed like a very strange date night: “Come out to dinner with us and watch us eat!”