We’ve walked the lines in many different weathers (the worst being our last walk of the District line, in darkness and pouring rain for an hour and a half, during which I discovered my waterproof jacket was actually not waterproof). But this was the hottest walking day we have ever had, with temperatures predicted to reach low 30s. Rare enough for Britain, let alone in a long weekend. And not ideal walking weather.

We also don’t usually walk on a Sunday, as there are less shops open and we don’t have the luxury of a recovery day afterwards. But here we are, bank holiday weekend in August, deciding to do a long walk on a too-hot Sunday.

We started at Wembley Park, our second time passing this station (we previously walked by it while walking the Jubilee line in 2015).

After another obligatory photo of the arch (we have seen it from several angles now across north London) we were on the look out for breakfast. This posed us some problems as it seems most cafes in the immediate Wembley Park area are closed on Sundays. Some deep googling finally turned up the name of Ecco’la, an Italian cafe that also offered breakfast dishes. We had a fine meal here, sufficient to fuel us for most of the day. And so we set off…

We started at 10:00am with enthusiasm, as we passed by several close-together stations only 20-30 minutes apart. Preston Road, Northwick Park, Harrow-on-the-Hill. Largely dull walking down suburban streets, with occasional bursts of interest when we crossed a high street near a station. The underground is above ground out here and we crossed over it several times. But it was coming up to midday and very hot already.

Leaving Harrow-on-the-Hill by underpass (which I always think of with the Russian word, “perekhod”) and through more suburbs to West Harrow. Here we walked under the underground overground and then took a short but blessed walk down a tree-lined path in a park – one of the few shaded places in these sun-blasted north-western suburbs. We arrived at Rayners Lane station with the “Wed in St” shop next door, familiar from last week, by 1pm. Lunchtime. Except we didn’t stop to have lunch. We kept on walking. 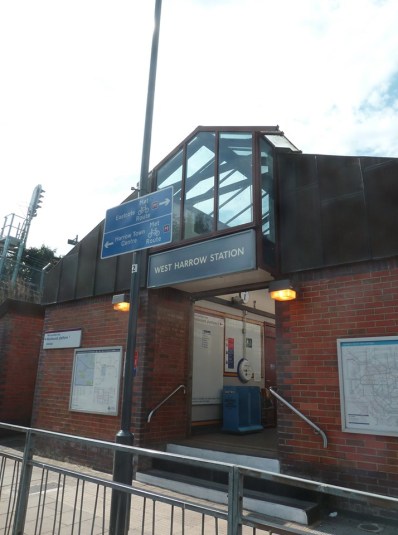 From here it got even hotter, and the stretches between stations grew longer. At Eastcote we took a few minutes to sit on a bench and drink the second of our four bottles of water while we watched a couple in an apartment building opposite have a screaming argument. Ruislip Manor looked like it should have been posh but there were a large number of hotted-up cars driving around. Ruislip was a quaint old station that must have been built for railway instead of underground. The houses, we notice at this point, were more like country cottages, albeit on smaller pieces of land and facing a main road. As we continued down another straight, long, dull, shadeless main road, we passed the White Bear, and it didn’t take much persuading for the husband and I to rest our feet in the shade here and partake of some liquid refreshment. We don’t normally stop for an alcoholic drink mid-walk (the problem of taking on liquid can be rapidly followed by the need to offload liquid) but my feet were in swollen hot pain at this point and I really needed to sit and put my feet up – literally up on a spare seat (we were sat out in the last patch of shade in the garden). The barmaid kindly refilled one of our water bottles as we were leaving (we were down to 1 1/2 at this point) so we hoped to have enough water to see us through the rest of the walk.

On the road to Ickenham we passed by West Ruislip. We were last here in 2015 when we started the western end of the Central line. But today we passed it by. Ickenham station is an ugly building down a lovely side street but prettily decorated with flowering plants in decorative pots. And it had some shade which we were grateful for as we plotted the route to the next station. Hillingdon is perched on a motorway cliff beside the busy A40. It had a strange layout, with the entrance on the main road, but a long kind of footbridge leading to the station proper. Crossing the A40 gave the impression that we were leaving London and entering some other state of existence. Not quite the countryside but not the city either. One more station to go, and it’s the longest inter-station walk of the day. It’s around 3pm now, the temperature is at its hottest and we haven’t eaten since breakfast. 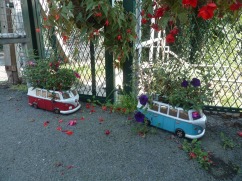 It’s another long road that leads to Uxbridge. With no shade. What’s the point in living so far out of the city if you don’t have trees that can provide shade to a weary walker?

At a quarter to four, we arrive. It’s Uxbridge, the end of the line. We never have to come here again. Which is actually a shame, because the town centre seemed quite nice, almost villagey (albeit with a big shopping centre – which had air conditioning! I was so appreciative of that). We had no time to linger though, we had to grab some food supplies for dinner with our neighbour that night and start the return journey, which took us nearly 2 hours: Rail replacement bus back to Rayners Lane, driving so swiftly past all the stations we had just laboured past on foot (“Look, that couple are still sat at that table in the White Bear”), Metropolitan line to Kings Cross, Victoria Line to Blackhorse Road and then another 1.5km to walk home.

Three more walks to go and this project will be finished. 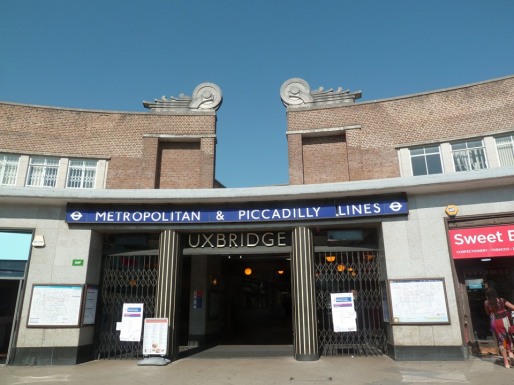