Here I am, back in Edinburgh for the Fringe Festival, more than 20 years after my last festival experience. I plan to give updates on the shows we see, how I feel my diet and health is, and any observations about the city or sights that occur to me.

Are you ready? OK let’s go.

Day 1: arrive Edinburgh, check in to our accommodation (airbnb – hotels double their prices for August and the Festival), and off to collect out tickets for the coming week’s entertainment. 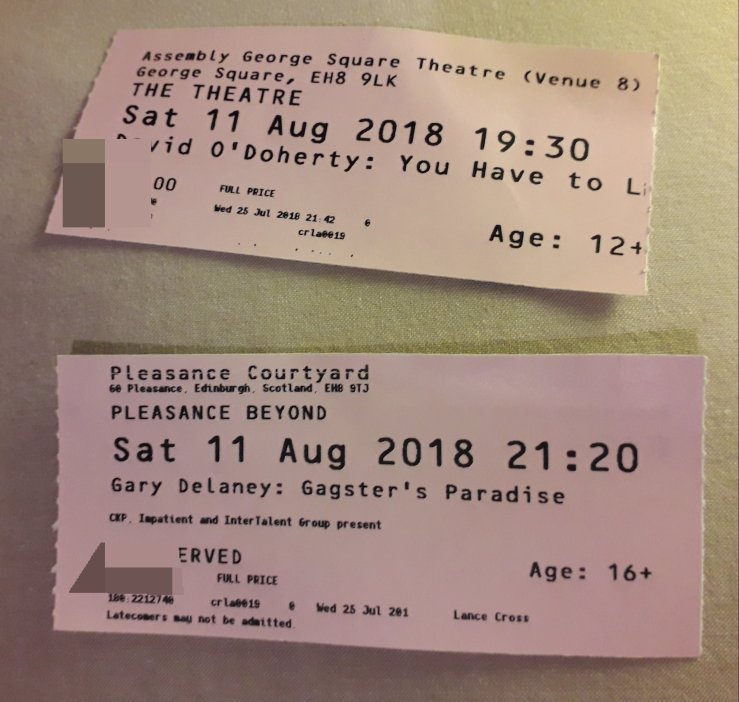 David O’Docherty: You Have to Laugh

Our first show and it’s in the very festival area of George Square. There’s a fenced off Udderbelly area in the centre of the square (complete with inflatable purple cow), lots of pop up food and drink stalls.

The Assembly theatre is a fine piece of brutalist architecture, usually a university lecture theatre by the look of it. Tonight it’s sold out and full.

David O’Doherty’s humour gently mocks the vagaries of modern life, mostly through the medium of song. Yes, I think, maybe this is the time to get my shit together. And conversations with my younger self would be probably be unfulfilling.

The second show of the night is on the Pleasance. We have several events booked here so will be coming back a few more times during the week.

Pleasance is a conglomeration of many venues: upstairs, beyond, below, one, two. I don’t know what this area would be when it’s not a festival venue but tonight it’s jammed with people. We locate Beyond,our theatre for the night, at the back across a second courtyard.

Gary Delaney is a master of one liners: sharp quips and funny puns. He has so many jokes he was able to give some away for free with screen grabs from his Twitter account on his pre-show screen saver.

Some of his jokes step across the line for what is politically acceptable (into the “I know I shouldn’t laugh but it is funny,”) and he punishes the audience for any “Oooh” reactions to jokes by putting back in a joke he previously took out because he felt it was too much.

He supplemented the rapid fire jokes with some visual jokes – fake Wikipedia entries, fake Amazon reviews, and some news from the town of Gary, Indiana.

Did not drink enough water today. The train up had broken aircon so I started from a place of dehydration which could explain my shaky feelings all day. Had a healthy Korean bibimbap dinner (lots of vegetables) but cancelled that out with a pint of cider at David O’Doherty and a pint of beer at Gary Delaney.

Edinburgh gets busy during the Festival and there are lots of people around. And so much litter! Discarded takeaway boxes and event leaflets, glass and plastic bottles, general detritus all over the footpaths making the place look cheap and tacky and dirty. Maybe it was just Saturday night but it was disappointing. And both my Festival drinks were served in plastic glasses. My environmental self is saddened at the thought of so many single use plastics being added to the world.