The day lured us out of bed with the promise of sunshine but that promise disappeared into rain pretty quickly. Although the day did alternate between bright and rain which is better than a constant not-quite-rain-but-wet-air like yesterday.

11am at Whistlebinkies. I know I drank here often in my Edinburgh-dwelling youth because this pub was open until 3am. At least. So to be here in the regular a.m. and sober felt very weird.

Today’s show was another taster session by four different comedians. The two stand outs were Helen, who read out sections of the diary she wrote at age 14. The hysterical laughter from the audience was in part recognition of their 14 year old self. The other stand out was Aidan Greene who we had already seen twice on Sunday. The show comes with free “bacon and eggs” so worth getting organised early for.

A song and then a story about Phil receiving an honorary doctorate. If you ever meet Phil Jupitus, do not ask him about Stephen Fry. Just…don’t.

Husband keen to support the old country so we got tickets for Kiwi comedian Jarred Christmas. Good fun show with fun facts, puns, a tale of being upstaged on a German TV show and a surprise ending. Regardless of his DNA profile, an above average comedian. 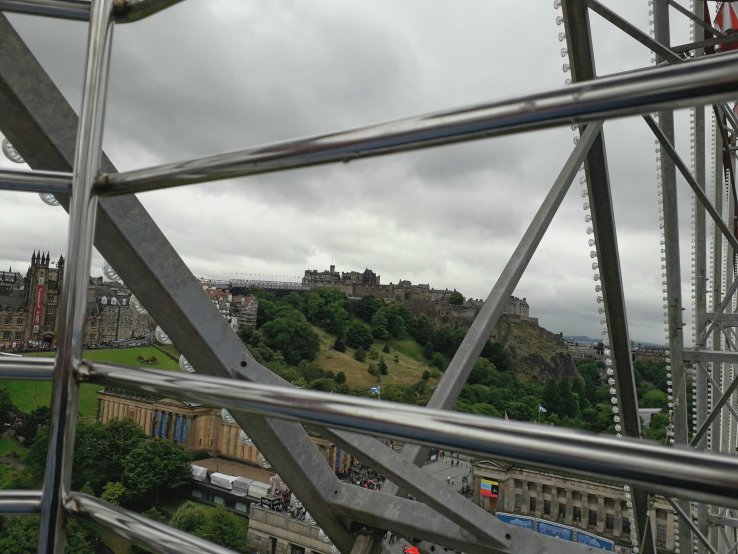 Observations: What I liked about Edinburgh when I lived here (and still do as a visitor) is its outlook. I don’t mean psychologically or economically, I mean geographically. And no so much where in the country it is but how it is. The old town is built on a volcano. The castle is at the top of a cliff. There are hills in the middle of town (Arthur’s Seat and Salisbury Crag) which give a sense of space amongst the built up-ness of the old And new towns. And when you get up high you have views to the sea. I love that. I’ve a city with vistas. I grew up in a city with hills and vistas and I miss that in my London life.

Health: it was a catch up with people day, so we had a big lunch. I had a hamburger – with haggis! (and chips) Very nice it was, if a bit rich. And husband’s choice of ribs was similarly filling. We didn’t want dinner, so that balanced out the big lunch but I did have 2 x caffeinated beverages at lunch and 2 x alcoholic beverages in the evening and did not drink enough water.