The day after our Heathrow walk dawned fine, and our legs were not particularly sore or achy. We had discussed it the day before but all the signs combined correctly to confirm it.

“Let’s do this,” we agreed. “Let’s walk the last stretch today and finish this thing.”

And so it was, around 9 a.m. we set off from South Kensington station.

South Ken is a very French neighbourhood, with the French embassy and the Institute Française encouraging French restaurants and French cafes to serve the French population.

I have memories from my early days in the UK of having to come and queue up outside the French embassy to get a Schengen visa. In those days, when there were no budget airlines, and Eurostar was only just about ready to start operations, the way to get to Europe was by bus. And the closest connecting point to Europe from London was France. So even if France was not your final European destination, it was your first country encountered out of the UK. And France required Australians to have a visa. So my first encounters with Europe proper would have come from the French Embassy.

We walked on past the Victoria and Albert museum, which I have been to for some special exhibitions but I’m not sure I’ve ever been to see their regular collection. It’s a beautiful building, but my favourite from this area is the National History museum with its jaunty striped exterior. (We don’t walk past that one today.)

Harrods comes up on our right as we approach Knightsbridge. Neither husband nor I have fond memories of the place. As far as I recall I’ve only been once during my early days in the UK. I remember crowds and noise and I didn’t make it past the food hall. I remember I did get my Mum a tin of Harrods tea. It must have seemed an appropriately English gift.

There didn’t seem to be a station proper at Knightsbridge, just a staircase coming up from underground. After so long in the suburbs with the Underground overground, we’re back to Underground underground again.

We walked through a small corner of Hyde Park, crossing the sandy bridleway path already littered with horse poo. “Who is responsible for cleaning up the poo?” my husband asked, making a valid point that dog owners must carry little baggies to collect poo but horse owners not so much.

Hyde Park is lovely, especially early on a Sunday morning before there are many people about. My husband and I both lived in the same backpacker hostel in Bayswater in our early days in London – although our early days were some years apart. We talked about how nice it was to live so close to Hyde Park and have that space to get out into when living in close quarters with three strangers in a hostel in a big unfriendly city got too much.

Actual Hyde Park Corner with its fancy gates and Wellington Arch was doing moderate tourist business for an early Sunday morning. We carried on down Constitution Hill and up through Green Park.

In all the times I’ve walked through Green Park, I don’t think I’ve ever approached it from this corner. But on this fine day it lives up to its name, quieter at first before becoming quite busy near the Tube station and the link path between the Tube station and Buckingham Palace.

Emerging from the park we first pass by the Ritz. I had afternoon tea there once, a gift in thanks from a friend who I put up for a week while she was visiting London. It reminds me that I would like to try more afternoon teas. 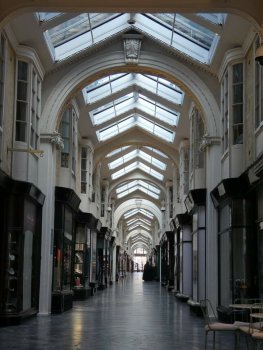 We cross the road to look into Burlington Arcade. We had hoped to be able to whistle through the bars but it is protected today by a Burlington Bobby so we peer in for a bit and then turn around to admire Fortnum and Mason across the road.

“Has Fortnum’s always has those modernist sculptures on the building?” I ask. We assume they have been there for some time but due to the hundreds of tourists usually milling about when we pass by we don’t have an opportunity to look up. 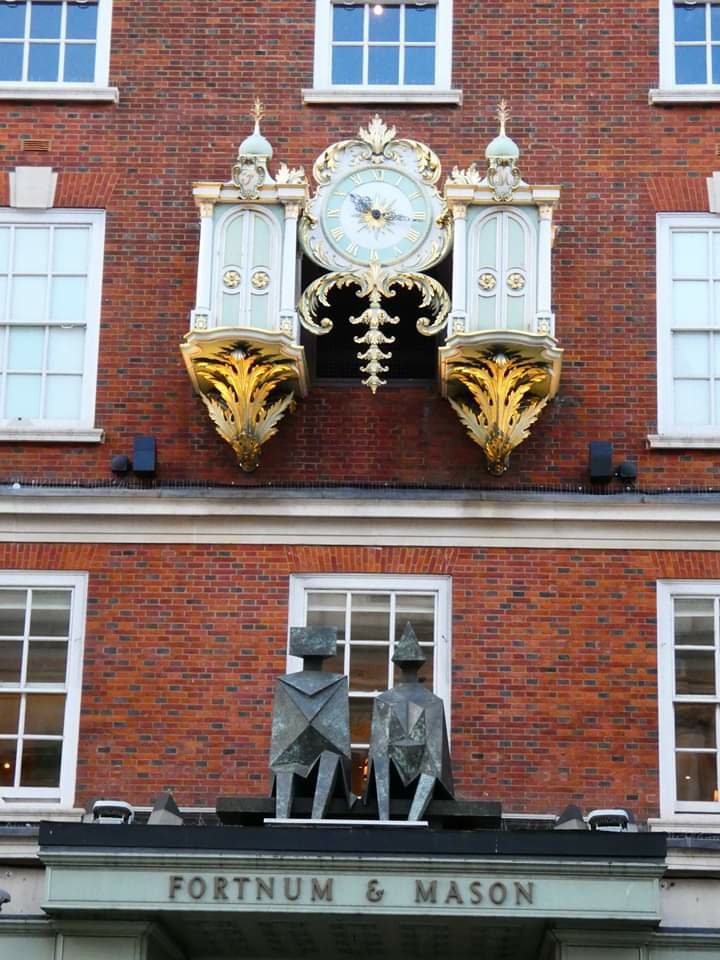 We pass by St James church which usually has a nice market on Saturdays and where I once caused a fight because I booked us tickets to a concert of Russian religious Christmas choral music. I guess I thought it would be jolly a Capella Christmas tunes but it was in fact much more Russian religious than Christmas. “This is exactly how I thought it would be and exactly why I said I didn’t want to come.” Husband then shut his eyes and pretended to sleep through the whole performance, refusing to speak to me.

Piccadilly Circus station is also underground. I remember when Tower records was nearby, and my flat mates and I would make special trips into town for the Tower Records sale, to stock up on CDs and DVDs. Tower Records closed some years ago. 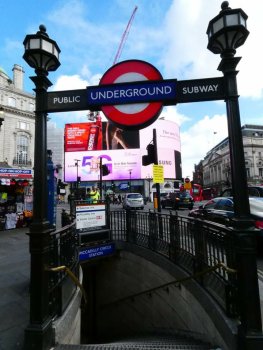 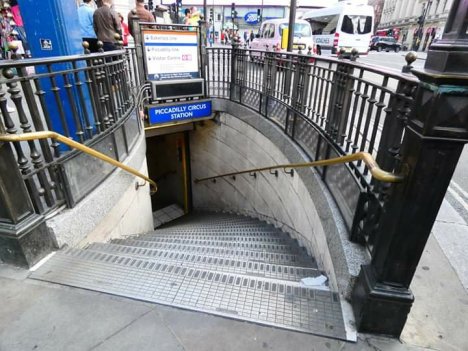 We’ve passed something like five Caffe Concertos by now. I had never noticed there were so many of them.

It’s around 10:00am now and I don’t ever recall seeing the base of the Eros statue so empty. Usually the base is covered in young people, just sitting. Usually if I’m coming by here it’s night time, and I’m on my way to see theatre on Shaftesbury Avenue. But not today. Today we walk on, past M&M world (why? I don’t understand this obsession with M&Ms), past the Swiss clock, through Leicester Square where a street performer is warming up for his act, to arrive at the corner by the Hippodrome. 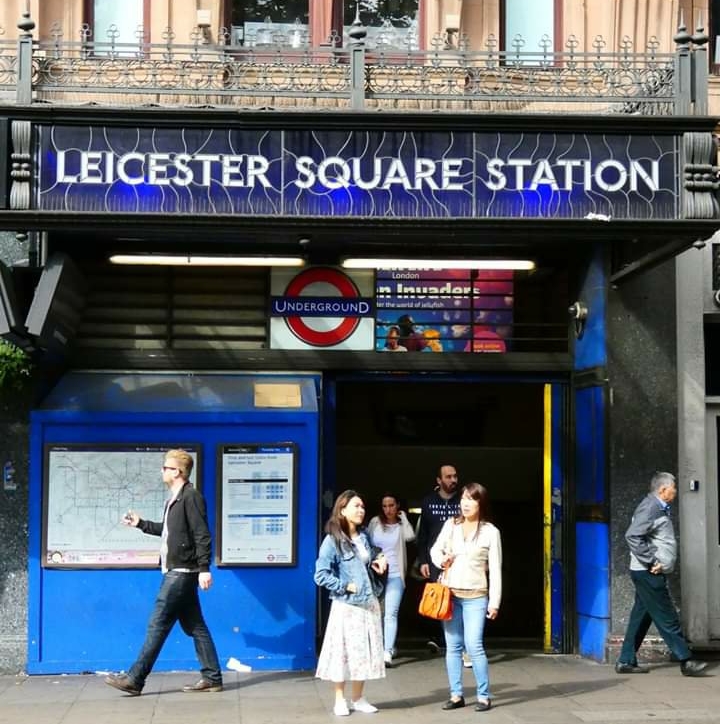 I always have a sense of nostalgia about this corner. I know it’s tied up with memories of my early days of being in London, but I can’t recall why I was standing there. I remember thinking “Wow. Leicester Square, like on the Monopoly board.” These days this area is less impressive to me, due to the usually high number of tourists milling about. However early on Sunday morning its less crowded, and maybe a little less unpleasant.

The fancy shops of Long Acre tick by and we are outside Covent Garden station before we know it. The stark white shape of the Masonic Hall marks our path towards Holborn. 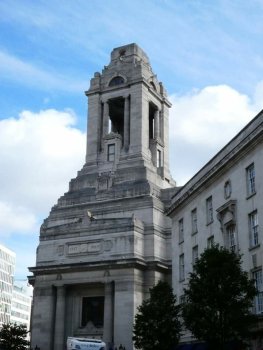 We pass close by CityLit where I’ve done various courses over the years, mostly Spanish but most recently photography.

We come out onto Kingsway and pass by Holborn station. I worked near here for several months on my second (and more successful) attempt at living in London (after all, I’m still here now). This stretch of joined up working came after several years of itinerant working and I finally had enough spare income to afford a dentist visit. I’ve sort of stuck with the same dentist although they’ve moved and I’ve moved and they’ve changed name.

We turn onto our final straight stretch of this walk and the end of the whole project.

I remember that in my Temp Life I worked in a few places around this area. There were some educational institutions which provided some interesting stories. I remember one place had the worst culture of any organisation I’ve worked in. It was November and they were doing preliminary analysis of the staff turnover. Out of a total staff of 600, 100 people had left during the year. I was in the HR department and we had a “crying chair” where people would come in and sit and cry when the bullying or frustration got too much for them. However even here they weren’t safe as the HR Director once shouted at a crying employee to “Stop crying and get back to work.” Ah, happier times.

Russell Square, our penultimate station, is tucked down a side street. Just afterwards we pass by the Royal National Hotel, which used to be the pick up / drop off hotel for Contiki tours (not that I ever took one), in fact it may still be. It’s big, it’s grey and it looks grubby. It does not look like a nice hotel. However it does look like everything I would expect from a Contiki tour.

We’re approaching Euston Road but that’s not a nice road, I don’t want to walk down it. We turn instead down Woburn Walk, a little pedestrian street full of Victorian-fronted shops. Very cute, probably also very expensive to rent, so it was surprising to see a clairvoyant had premises there.

Eventually we turned back to Euston Road, in front of the British Library. We had a discussion about whether it was the builder who worked on our kitchen who had done some work on building shelves in the British Library. I’ve only been in there a couple of times when I was last studying, to access books on my required reading list which were not held in any university library in London, of course.

On past the beautiful St Pancras station and Renaissance hotel building, and we arrive at Kings Cross underground station. It’s been five and half years since we passed by here on our first Tube line walk. 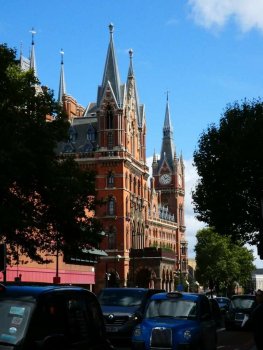 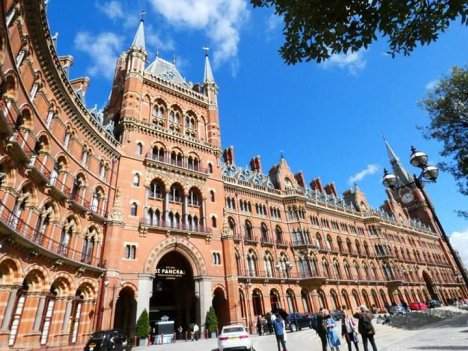 And like all epic journeys, it ends with a whimper not a bang. 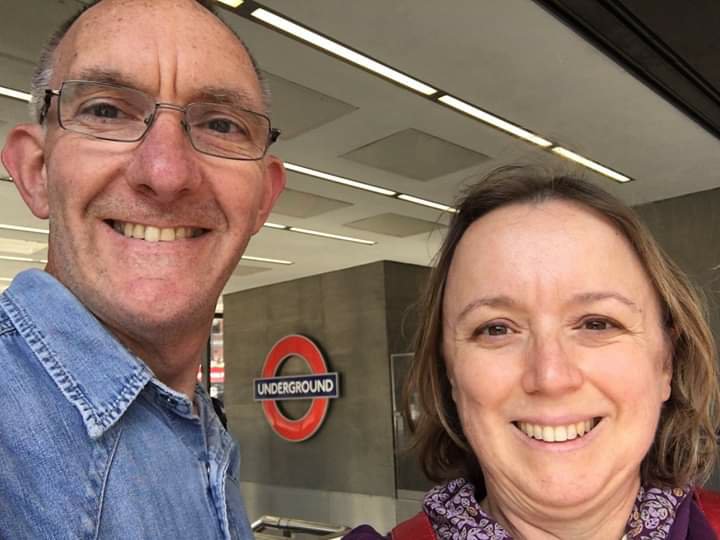