There is a difference between going away and coming home.

London to Glasgow by train.

I have my own little rituals around train travel.

I like to get on the train with a coffee.

And I like to listen to Tears for Fears Elemental album, as it was one of the few cassettes (yes it was that long ago) I had when I first moved to the UK and I listened to it a lot while I rode the train back and forth from London to the north and back again.

We join a queue at Euston to get onto our train. The queue moves slowly – why? When we get to the front and the narrow channel opens out into the train platform there is no impediment, apart from people getting to the front of the queue and stopping to wonder which carriage they are getting in, holding up everyone behind them who knows where they’re going (like us).

Once past the barriers it’s like the start of a race. Despite most of us having reserved seating in this train everyone picks up speed and starts pacing toward their carriage like it’s a competition to get there before someone else. Which way is faster, to go around the outside or stick close to the train where you will be held up by people stopping in front of each carriage?

We go around the outside and take our seats without hassle. In fact we have timed it so perfectly there is just about enough time to stow our suitcase, sort our immediate train journey needs and for me to locate Elemental and press play and then the train starts to move. 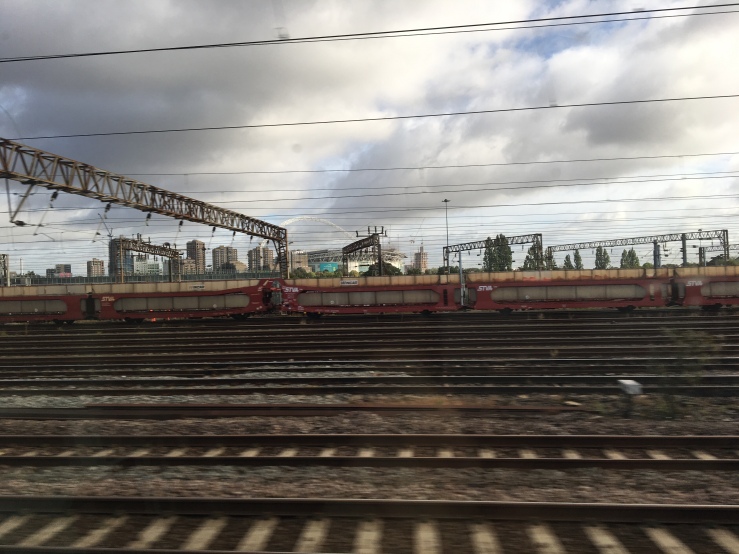 This morning’s blue sky has given over to grey clouds.

A man on the train passes by with two cans of Budweiser. Did he buy them on board? Why are they selling beer at 10:10am? Who needs a beer at this time of morning? He goes through into the next carriage. Good. People who are drinking at this hour are going to be noisy and this is a 4.5 hour train ride.

For a brief moment I see a canal and a motorway out the window and I think about the industrial history of this country encapsulated here – road, canal, railway – all travelling in parallel. But then the landscape shifts and the motorway disappears in a different direction.

47 minutes in and Elemental has finished. I think I will listen to it again. It suits the grey skies outside (where did this morning’s blue go?). In fact it starts raining just after Rugby.

The train drops speed to pass slowly through Stafford station. The platform is crowded with people. Where are they going? Where have they come from? Once we clear the station area the train picks up speed again and I take a break from my book to look out at the flat flooded fields. Green grass alternates with brown tilled soil which alternates with golden stubble decorated with round bales of straw. Cows in one field, sheep the next. Sometimes a horse or two. I go back to my book.

I finish my second round of Elemental just after Crewe. Time to switch to the Moody Blues, Long Distance Voyager. Seems appropriate for today’s journey.

We make a first stop almost 2 hours into the journey. Warrington Bank Quay. I take the opportunity of a non-moving train to get another coat of nail polish on. 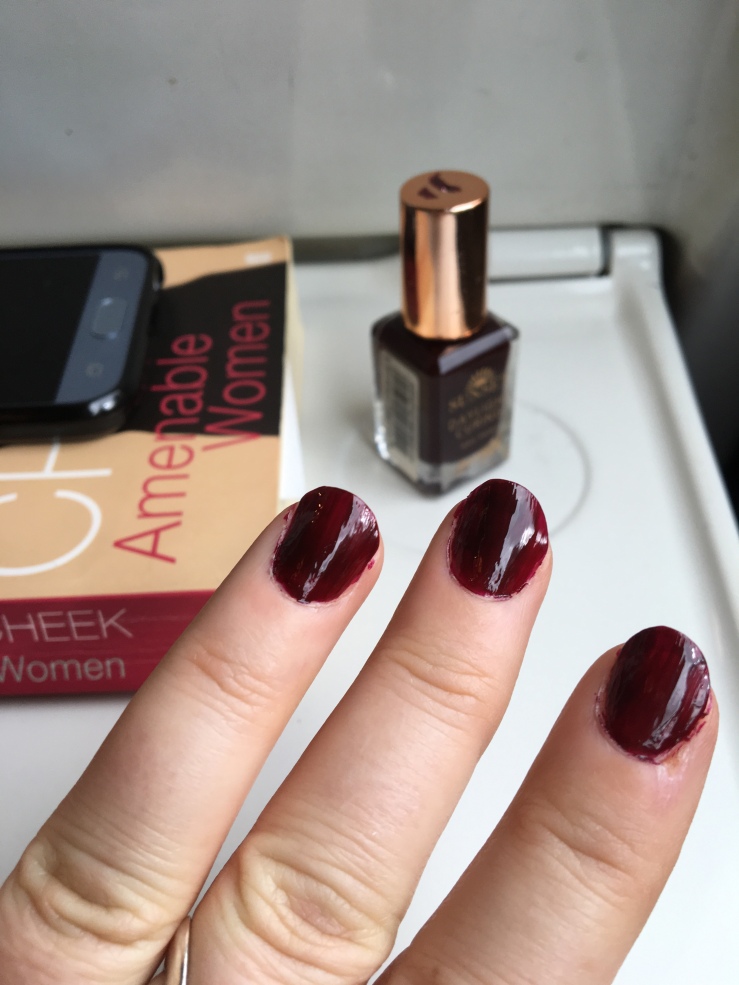 Wigan North Western. It’s raining quite heavily here. The next stop is Preston, where I once lived, poor and unhappy, bullied at work, spending most of my income on rent, living on porridge and vegetable lentil soup. I had nice flat mates though.

I think about my bullying former boss. This still brings a small knot of tension to my stomach. Then I remember how good it felt when I walked up to his desk and told him I quit.

We leave Preston and its unhappy memories behind and roll onwards, northwards. This is not a good album after all. I switch to a playlist.

At Lancaster the sun starts to break through the cloud for maybe 15 minutes before bigger deeper darker grey clouds dump rain down in sheets and dissolve the landscape. By Penrith the sun is out again and the train passes under a rainbow. At Carlisle it’s grey again and a Scotrail train at the station announces our proximity to the border.

Glasgow is in sight when I get a panicked call from my sister. She is house sitting for us and has failed to take on board our instructions about how to unlock and relock the front door. We have to do some over-the-phone counselling about how the door works as the countryside gives way to the city and we approach Glasgow Central.

We cross the Clyde river, which is surprisingly still, compared to the raging streams we had seen on our trip up. Then the train slowed and stopped, and we arrived at Glasgow Central.

Glasgow to London by train

Get on train without coffee, still feeling unwell after overindulging at yesterday’s wedding party.

Feel unjustifiably angry at the inability of fellow passengers to properly stack luggage in the luggage rack.

Read book. Doze. Glance regularly at phone to work out when we have crossed the border back into England. Feel a little bit sad when we do.

Buy and eat a sandwich from the on-board café.

Continue to read book. Doze every now and again.